WWE 2K20 is the latest entry in the yearly WWE video game franchise, and while the series is usually a lot of fun to play, this year … it leaves a lot to be desired as there are a ton of bugs and glitches. It is public knowledge that 2K had planned on cutting ties for years due to having to pay Yukes for the development of the game. They decided 2k19 was the last year they would be doing it. The sad part is they didn’t even have their side ready for this change, and it definitely shows. 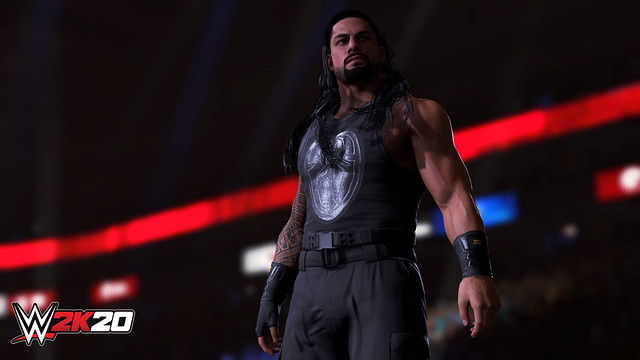 Graphically, the game looks downgraded compared to last year’s entry as the character models in-game have no shading to them and even look plastic. On top of that, while some of the Superstars look like their real-world counterparts, others do not at all. The lighting in the game even makes Becky Lynch’s hair more orange than it should be … practically close to glowing.

Sound is important to a wrestling game (i.e. hearing the smack of a hit on your opponent from a kick or a punch or the sound of a weapon colliding). While these things work, some other things are broken. Entrance music for certain WWE Superstars is broken, looping repeatedly for stars like Luke Harper or being soft then extremely loud for others like Liv Morgan. The sound of the crowd, announcers, in-game soundtracks, and the mat sounds are actually on point though. 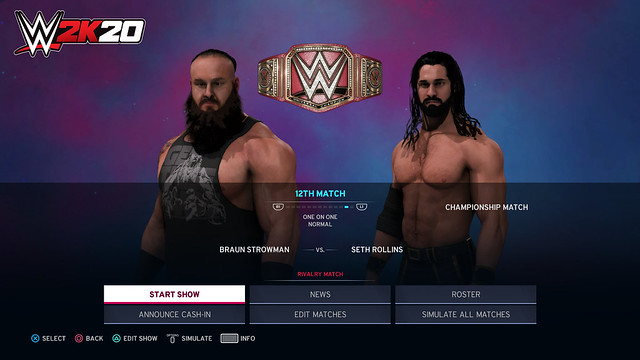 The gameplay is the most important thing to consider, and it has a variety of modes for players to play. Exhibition matches host a variety of gameplay options — from 1v1 style of matches, 2v1, 3v1, and all the way up to eight people playing against each other or 4v4 style, or even everybody for themselves. While some of the matches work fine, others have a few bugs. The eight-man money in the bank ladder match I played in had a bug where you’re supposed to win the match by climbing a ladder and bringing down a briefcase suspended above the king, but the match ended because someone pinned another opponent in the match for a three-count. One of the positives though is that the weapon wheel has been added to a lot of the match types, including Hell in a Cell. This, in particular, has been something I’ve been wanting to see for quite some time, so to finally have it is a blessing. Sadly, this isn’t going to help as collision detection is wonky and broken too. It will connect when it wants to, but miss more than connect (whether it’s a punch, kick, move, or weapon).

MyPlayer Mode houses MyCareer where this year’s story centers around your two created characters (both male and female) trying to make it to the WWE to live their dreams … all while keeping secrets from each other. While this is fun to play, it suffers not only from the bugs plaguing the game, but personally, the dialogue is a little too cheesy, even for me. 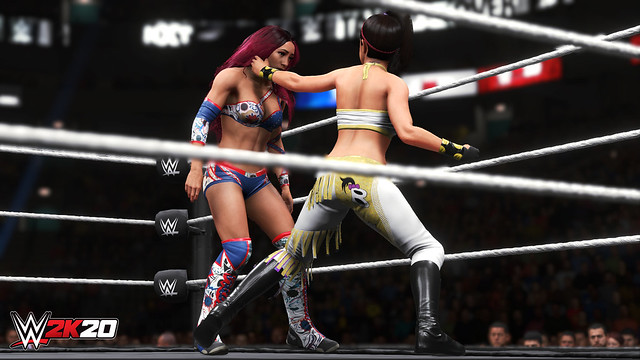 Showcase Mode (where you play through the careers of Becky Lynch Charlotte Flair, Bayley and Sasha Banks, aka The Four Horsewomen of WWE) is broken as well. While sadly boring to play, all you do is recreate the matches by doing a checklist and watch cutscenes. Nothing against the women in this, but I feel that this mode is really lacking and has been for quite some time. Maybe it’s time to come up with a different mode. Universe Mode is basically the same as I haven’t really seen anything different here (so that’s a little bit of a letdown) and just like the rest of the game, it’s broken too. 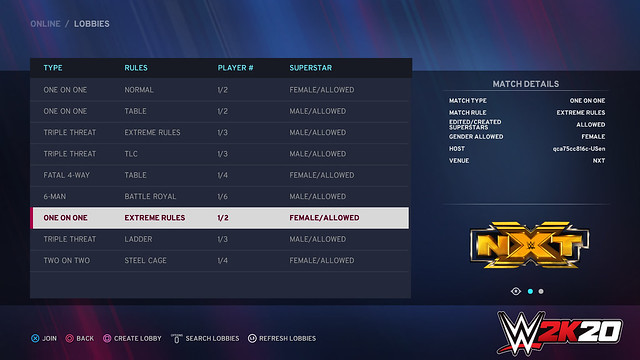 Online Mode is (you guessed it) broken. It suffers from a lot of lag as well, thus slowing down the matches you play, even against one of your friends. You won’t see wrestler entrances and user-created arenas in this mode as they were removed for people to play right away. But with how laggy it plays online and with people liking to show off their creations, this feels like a big miss.

Lastly in the playable modes is creation suite which offers: Create-an-Arena, Superstar, Entrance, Victory, and Moveset. Almost all of these work without issue except for Create-a-Superstar, as trying to do certain things (like remove Mankind’s mask) will cause the game to crash. Another issue is that if you put any logos on your character, you won’t be able to play as that character. When you go to play a match with said character, it will either continue to load forever or crash the game. Create-a-Championship is missing but 2K and Visual Concepts have stated it will be coming in a future patch. Community Creation, which allows you to upload your creations, is broken as well. I tried to download a different attire for Hulk Hogan but it wouldn’t let me, saying I need Hulk Hogan from the Deluxe Edition of the game (which I have) and Scott Hall and Kevin Nash unlocked (which I have already done). And don’t bother trying to download any images you upload to 2K20’s image manager as you can’t download them to your console. 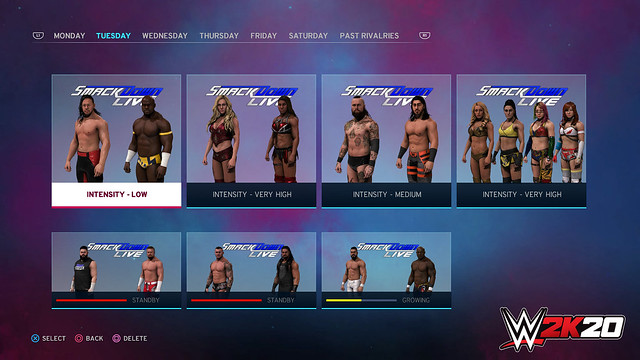 Controls have also been changed this year. Visual Concepts said the reason they changed the controls is to make it easier for new players to enjoy, while also making it a challenge for long-time players. After playing this myself, it actually feels like they changed the controls just for the sake of changing them. Reversals are now the triangle/y button meanwhile to perform a signature or finisher move, it’s square + x on PS4 or x + a on Xbox One.

Overall, WWE 2K20 is a broken mess across the board and while it had its issues in the past, they were never this bad. The first patch of many is coming in two weeks, but if you still want to pick up the game, wait until a few patches have fixed the game.

Tags: 2K, Features, Simulation, Sports, Visual Concepts, Wrestling
Summary
Overall, WWE 2K20 is a broken mess across the board and while it had its issues in the past, they were never this bad. The first patch of many is coming in two weeks, but if you still want to pick up the game, wait until a few patches have fixed the game.
Good
Bad
3
Bad
Gameplay - 3
Graphics - 2
Audio - 3
Replayability - 4
Controls - 3

GET READY FOR THE MOST CHALLENGING OFF-ROAD RACE
February 27, 2020