What if you could become the hero you were always destined to be… Ramen VR, an indie VR studio that’s creating a one of a kind VR metaverse, today announced it has launched a crowdfunding campaign for Zenith, a cyberpunk VR MMORPG for VR and PC. In Zenith, players will be able to play, socialize, and create their own unique experiences in the first cross-platform VR MMORPG.

Inspired by anime and JRPG classics and reimagined as a dynamic living world with cross-play between VR platforms and PC, Zenith offers a futuristic universe in which players will fight, craft, explore, and live as they forge alliances and friendships in guilds and parties. In the game world, the city of Zenith has been sheltered from the mayhem unleashed by the crash of a massive starship. While the beasts and horrors brought by the spaceship have been brought under control, the seal imprisoning the God-King responsible for the chaos grows weaker every day—heroes are needed to venture forth to save Zenith from another calamity. Characters who take up this challenge can participate in epic raids and world events or go solo to become a powerful leader whose deeds will be forever immortalized. 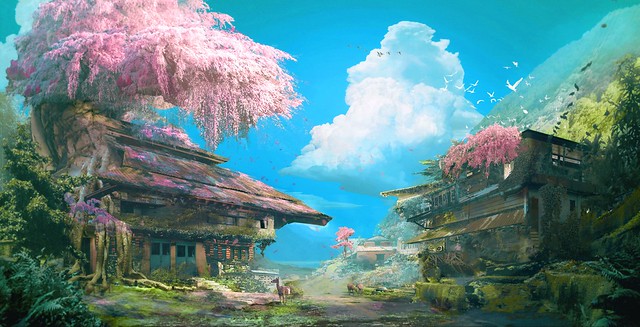 Zenith is the brainchild of Andy Tsen and Lauren Frazier, co-founders of Ramen VR with a decade of experience at Unity, Google, and building startup companies. The duo met at Oculus’s VR accelerator program, which they won, and then co-produced with Oculus Conjure Strike, a 3v3 competitive VR shooter that was nominated for VR Game of the Year and Multiplayer Game of the Year by Unity. In addition to the game’s core team comprised of passionate game talent, Adam Hetenyi, the lead game designer on Trove and The Surge 2, serves an advisor on the project.

“Zenith is our passion project, as we want to share the dream of a living anime world that players can experience on VR and PC without limitations,” said Lauren Frazier, co-founder of Ramen VR. “We invite RPG fans to join us on our journey and imagine their lives as legendary anime heroes!”

The game’s technology is powered by Spatial OS, the world’s most advanced MMORPG platform, which enables the creation of large and dynamic open worlds. The platform will enable real physics, complex AI, and a landscape that evolves and is shaped by players and NPCs alike. There are also plans to use Spatial OS for features like conquerable player settlements, crafting, and customizable player housing.

“We view our backers and our community as co-creators with us,” said Andy Tsen, co-founder of Ramen VR. “We believe the more support we raise from Kickstarter backers who believe in the game, the more we’ll be able to realize the vision we all share.”

Zenith’s concept was a product of Tsen and Frazier’s love of anime and JRPGs, and their desire to create an innovative VR experience that fostered a rich environment and deep social aspects found in MMOs. In development since early 2019, Zenithaims to unite fans of these genres in a persistent world that builds and fosters strong community.

The Kickstarter campaign is live and will help the team at Ramen VR further develop the epic adventure while sharing early benefits with fans who help create the exciting world.