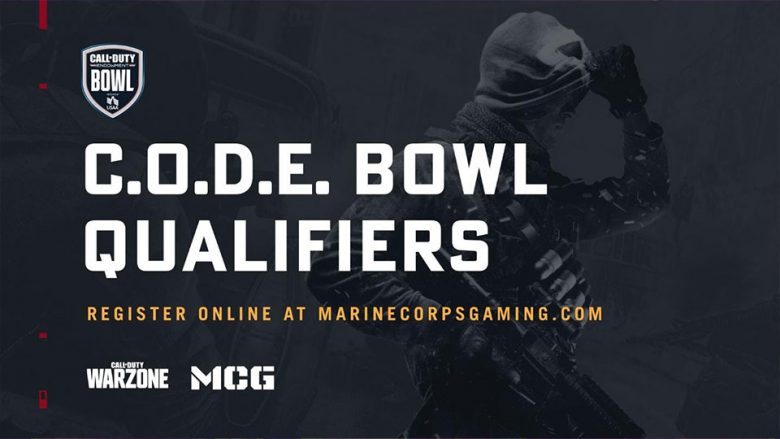 With the 2021 Call of Duty Endowment (C.O.D.E.) Bowl scheduled for December 10th, the Marines are looking for a few, great gamers. While last year’s C.O.D.E. Bowl made history as the largest interservice, transatlantic esports competition, it also marked the debut of the first competitive gaming element for the Marines. This year, in addition to adding a ninth service branch, the annual C.O.D.E. Bowl will take place aboard the historic USS Intrepid aircraft carrier in New York City.

Currently, Marines who compete, stream, and create gaming content do so as individuals outside of their regular duties, as the Corps has no formal esports team. With that in mind, a select group of Marines recently started a grassroots community to connect with their fellow Marines around the globe and to compete at the highest levels of esports in order to foster camaraderie around a shared passion for gaming.

Designed for Marines and by Marines, Marine Corps Gaming is a growing community found on Discord and spread across social media to overcome the geographic and institutional barriers that oftentimes separate Marines – rank, duty station, and military occupational specialty. Whether battling between each other to build esprit de corps or against the other service branches to breed competition, the Marines now have a platform to call their own and identity to rally behind among gamers who wear the same uniform. As a gamer himself, MCG’s founder Captain Michael Maggitti recognizes the power and benefits that gaming has among the growing population of younger Marines.

“Our Corps must evolve to stay engaged and keep pace with today’s generation of Marines,” said Maggitti. “As a military branch, the Marines have the largest population of young service members who grew up gaming to connect and communicate with their peers. Whether recreationally or competitively, gaming is quickly becoming part of who we are and what we do while in and out of uniform.”

Whereas the task force that competed on behalf of the Marine Corps last year was limited to members of Marine Corps Recruiting Command, this year the roster is open to Marines of any command. With the coveted C.O.D.E. Bowl trophy currently on display in the Pentagon, the Marines must prove their tactical and technical proficiency against their brothers and sisters in arms if they want to claim the title on behalf of the Marine Corps. Those interested in playing on the grand stage will need to compete in the Marine Corps Gaming C.O.D.E. Bowl Qualifiers on Saturday, September 25th, 2021. To register, Marines must verify their active-duty status by joining the MCG Discord server at www.marinecorpsgaming.com.

“There is more that connects us as a gaming community than separates us as military branches,” said Master Sgt. Michael Sullivan, Space Force Gaming lead. “Regardless of mission capabilities or uniforms, we all swore the same oath, and for those that game, we all understand the sense of belonging and community that doing so provides.”

The Space Force Guardians and the Marines will compete head-to-head in Call of Duty: Warzone in advance of December’s C.O.D.E. Bowl. Esports tournament organizer Rally Cry, who recently launched Defense Gaming to unite all U.S. military branches under one domain for accessible, secure, and inclusive gaming, will administer the event. Regardless of the show match outcome between the Marines and Space Force, the grand stage aboard the USS Intrepid is set to reach a global audience, promoting the mission of the Call of Duty Endowment as U.S. and UK branches battle it out in Call of Duty.

The C.O.D.E. Bowl has become one of the most patriotic esports events, featuring active-duty personnel while honoring the growing veteran population. With the goal of employing 100,000 veterans into high-quality jobs by 2024, the Call of Duty Endowment is the largest non-governmental funder of veteran employment and uses gaming to advance this great cause.

The driving force behind the program is Dan Goldenberg, the Executive Director of the Call of Duty Endowment and himself a veteran with 27 years of military service.

“It’s inspiring to see the growth of gaming within our military along with the connectedness, resiliency, and esprit de corps it drives,” said Goldenberg. “Whether deployed or distant from friends and family, gaming brings people together, and I’m excited for the C.O.D.E. Bowl this year to allow all the US and UK branches to compete against one another for a great cause.”