Today Ubisoft® announced that the US Nationals Finals for Tom Clancy’s Rainbow Six® Siege will take place in Las Vegas on December 13-15 at the Penn & Teller Theater located within the Rio All-Suite Hotel & Casino. In partnership with Caesars Entertainment, the US Nationals Finals will feature eight of the top Eastern and Western Conference teams, with the ultimate winner earning their take of the $140,000 prize pool and the title of Team USA. Tickets for the US Nationals Finals can be purchased here: https://www.rainbow6.com/tickets

To view the competition live, tune in beginning December 13 at: https://www.twitch.tv/rainbow6

“The US Nationals Finals and partnership with Caesars Entertainment has been an exciting step in our ongoing vision for Rainbow Six esports,” said Robb Chiarini, Esports Director at Ubisoft. “Esports is the future of sports entertainment and partnering with leaders in the space, such as Caesars, allows us to continue to deliver on our promise of delivering epic sports entertainment for our fans around the world. We are truly excited to bring Rainbow Six esports and the US Nationals to Las Vegas.”

Launched in July 2018, The US Nationals is open to all players in the United States, serving as a grassroots spotlight for the nation’s best teams and players, all gunning for their share of a $140,000 prize pool and the prestige of earning the title of Team USA. The US Nationals annual open qualifiers gives any US team the chance to participate.

In addition to the US National matches, Sunday will feature the Creators Showmatch: US Nationals Edition. Cheer on your favorite team of Creators as they stream and play a best of three showmatch. Here are the teams: 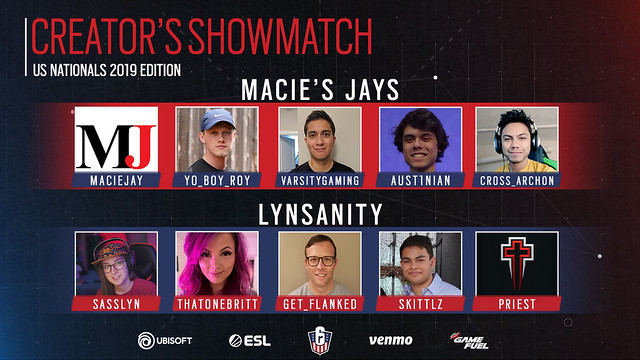 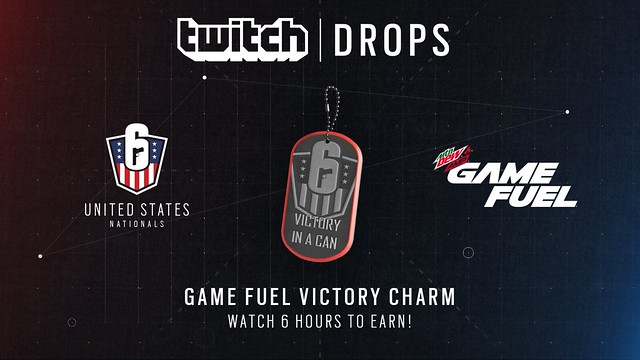 For the first time, tune in to the US Nationals and earn an exclusive MTN DEW AMP GAMEFUEL VICTORY CHARM!

The Charm is available to anyone who tunes in during the event Friday, December 13th through Sunday, December 15th and watches for at least 6 hours. Be sure to sync your Twitch and Uplay accounts to be eligible to earn the Charms.